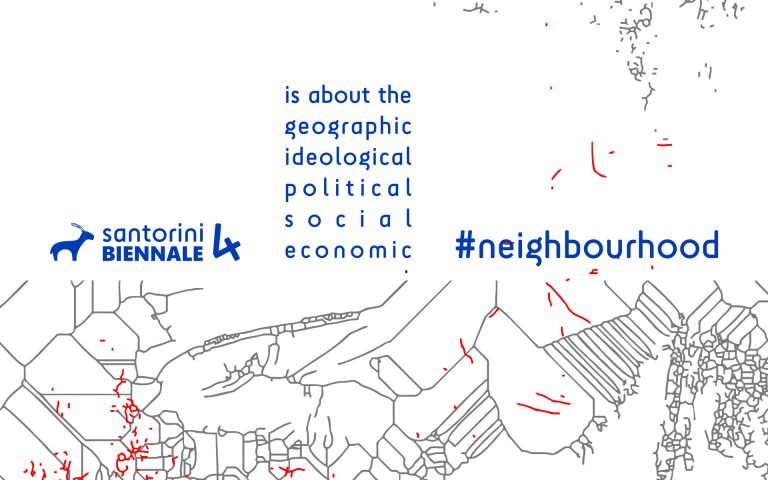 The Santorini Biennale announces a call for artists for Neighbourhood. Neighbourhoods are simultaneously geographic and ideological biotopes, political, social and economic spaces. They are common places without impermeability as different societies and cultures need to interact between them, especially when they are called to solve common problems such as climate change, environmental pollution, urbanization, social inequalities, intolerance, criminality, terrorism, sub-birth or population explosion, economic exploitation, production of poverty, and immigration. Modern diplomacy seems to run a marathon of sovereignty and enforcement rather than a process of normalization of relations between different neighbourhoods, thus interrupting cultural exchange and contributing to the creation of closed and fearful ideological societies around the world.

The Santorini Biennale Neighbourhood exhibit starts 1st June 2019 and ends on 31st July 2021. It will organize:

All exhibitions will be organized by art curators and supported by local authorities. Every exhibition will run for almost four weeks including all parallel event programs. Each artist or group of artists can participate in up to two exhibitions during the exhibition period (from 01 June 2019 to 31 July 2021) and in the cities chosen during submission process or those suggested by the curators. Venues are spaces of about 500m2 to 1000m2 and have all required exhibition facilities. The complete list of venues and the exhibitions program will be announced by the end of April 2019.

The Santorini Biennale is the idea of artist, designer, and economist Kyriakos Papadopoulos. It is supported significantly by many Santorinian and foreign entities. The idea for a meeting of artists from around the world in Santorini was born in 2001, when he first began to carefully observe the richness of this dramatic island and became true on 2012.

Santorini Biennale’s mission is to promote artists that are working on the borders between different art disciples, allowing them to surpass the traditional, and perhaps limiting, concepts of classicism, modernism, contemporary, and applied arts.