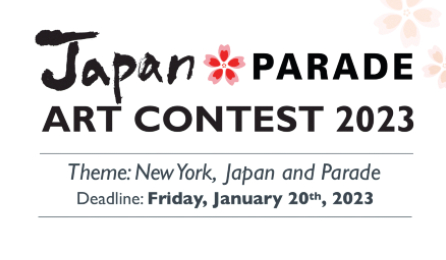 There will be one (1) Grand Prize Winner, who will receive two (2) round-trip tickets from New York to Tokyo courtesy of ANA (All Nippon Airway), one (1) Second Place Winner who will receive a one (1) night stay at a Japanese style bed and breakfast courtesy of Ogawa shou, and four (4) Honorable Mention Winners. All prize winners will receive a Brand Watch by Citizen.

The winning artwork will be utilized as Japan Parade 2023’s key visual and will be featured on official materials.

Japan Day has held Japan Day @ Central Park since 2007. Conceived as a way to promote cross cultural exchange, give thanks to New York City, and celebrate Japanese culture, the event was reborn as the Japan Parade in 2022. Japan Day seeks to not only contribute to and encourage the long-lasting friendship between Japan and the United States, but also to expose more people to the beauty and value of Japanese culture. They additionally organize charity efforts concurrently with events and donate to worthy causes such as the Central Park Conservancy and the Ukrainian National Women’s League of America.