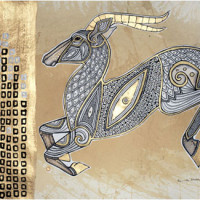 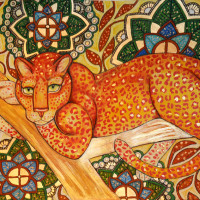 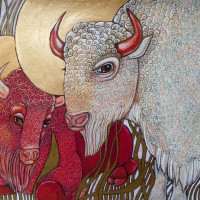 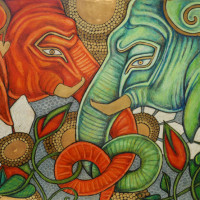 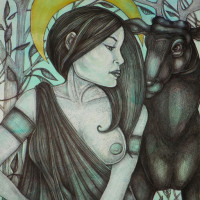 Artist Lynnette Shelley is a Delaware native who moved to the Philadelphia area in 1999. Having a great love animals, fairytales, and world mythology, Lynnette fuses these influences into her strikingly unique illustrations. Her artwork strikes a primal chord in many viewers, with almost Jungian associations to the colors and shapes. Her animal art and creature illustrations are both primitive and sophisticated, and have been likened to images from an undiscovered ancient civilization or culture.

"One of my primary interests has always been exploring legends and stories from around the world. Why are certain motifs ubiquitous across cultures and continents? These archetypal stories are told repeatedly in different guises throughout myth and folklore, and animals are often used to convey these mysteries. Whether painted on cave walls, portrayed as omens or worshiped as personifications of the gods, animals were a favorite theme for our ancestors. My artwork takes a closer look at this archetypal animal kingdom. Reinterpreted through abstraction, decorative element and contemporary vision, these creatures speak to our collective unconscious."

Her artwork has been displayed nationally as well as at various regional venues, including the Philadelphia Open Studio Tours (POST); the Philadelphia Academy of Natural Sciences; The Straube Center in Pennington, NJ; the Nichols Berg Gallery in Philadelphia; Three Ravens Gallery in Ardmore, PA; the Brandywine Festival of the Arts; the Wilmington Grand Opera House; Immaculata University's annual juried art show; Annex 24 Gallery in Lancaster; and the Maryland Federation of the Arts in Annapolis. Some of her creature drawings were featured in the animated short "The Spider Is the Web" shown at the 2008 Toronto Film Festival, while more of her artwork was featured as part of an on-screen art show at the 2008 H.P. Lovecraft Film Festival in Portland, Oregon. She also exhibited at the juried art show at Dragon Con in Atlanta, GA, one of the largest fantasy / sci fi-themed conventions in the world.

Lynnette is represented by Countryside Gallery in Newtown, PA. She is also a member of InLiquid, a Philadelphia-based nonprofit arts organization, as well as a member of the Manayunk-Roxborough Art Center. Please see her website's exhibitions page for her current event schedule at www.lynnetteshelley.com.

Lynnette currently lives and works out of Ambler, PA.