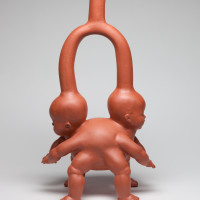 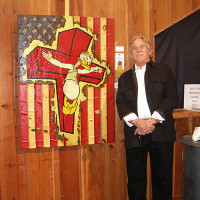 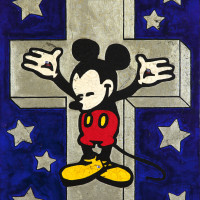 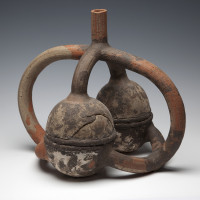 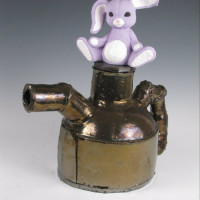 "The person that introduced me to clay many years ago taught me an important lesson early on. She had me take my first 14 pots and smash them with a hammer. The point was to not get too attached to the things one makes, but rather to remember that it is the process of making them that is important, and more importantly, that the process of making them is the "art'." Doric T. Jemison-Ball ll, often described as somewhat of a controversial figure in the local art community, comes more from the "outsider-brut-naive-folk art" tradition than from a more formal college trained MFA background. His formal artistic training consists of what he learned in elementary school, and two years of formal study in Ceramics. Informally, he spent six years in Europe as a child and experienced directly the rich traditions of European art. In addition, he spent most of his spare time in high school in the many excellent museums and galleries in San Francisco. Primarily a ceramic artist since the 1960's, Mr. Ball's entry into the Gualala artistic community was with two acrylic paintings in 2009. Since then he has won first place in Ceramics in Art in the Redwoods in 2009 and 2012 and a Judges Award for his ceramic sculpture in 2012. His acrylic painting "AF-PAK, Dead Duck IV" was judged "Best Local Work" in Art in the Redwoods in 2011, and he was again awarded "Best Local work" for "Siamese Twin Stirrup Pot" in 2015. Doric is an active member of the local artistic community; he curated "Confrontation Art" in 2011 and "All Ceramics and Nothing But Ceramics" in 2012 and has shown work in most shows at the Gualala Arts Center. His installation,"One Mouse Show", at Jack's Gualala Pharmacy and Art Gallery in 2011 was heavily attended, enjoyed by most and did much to increase his growing notoriety. He is the lead volunteer at the Gualala Arts Clay Art Center, and is currently President of the North Coast Artist Guild.