Flux Factory is currently looking for cultural producers of all kinds to join the Flux community for 3, 6, 9, or 12 month Flux Factory residencies starting in the Summer or Fall of 2017.

Flux Factory cultivates a spirit of openness and generosity through a unique collaborative and participatory approach to realizing its residency and public programs.  Each resident is responsible for their own funding, though Flux Factory can help with this process.

In August 1993, seven artists rented part of the second floor of a former spice factory next to the East River in Williamsburg, Brooklyn. The group came together as an informal artist collective to create an alternative platform to the commercial gallery scene.

Flux Factory was born out of the needs of emerging artists who come to New York City to take part in the cultural nexus. By 1998, Flux membership had doubled and the living room, with a new stage, evolved into a destination for art events and performances of all kinds. Supper parties and performances occur each Thursday, a tradition which continues with our monthly Flux Thursdays salon and potluck. Flux became an official 501 (c)(3) nonprofit in 1999.

In 2009, Flux Factory moved to its current location, an 8,000 square feet, three story, building in Long Island City. The new location provided an impetus to professionalize the residency program. Residents are now selected based on merits and their commitment to collectivism. Today Flux Factory hosts around 40 artists in residence per year. Flux commissions new work through quarterly exhibitions and residents produce public events at a prolific pace.

The Skopelos Foundation for the Arts is looking for adventurous artists that want to immerse themselves in and create from the Greek culture. They offer Skopelos Greek island artist residencies in ceramics, painting, printmaking, and sculpting from March through December.

Skopelos is a unique island with the contrast of light and color. It is the greenest island located in the Northern Sporades. The locals add to the extraordinary flavor of the island. The Foundation is set up to offer artist’s residencies from March through December. The Foundation requires a minimum of a two week stay and all applications are approved by the Board of Directors.

The artists that have worked at the studio range from newly graduated to mid-career. The Board of Directors looks at a range of things including ability to be independent, the project is not something that the artists would normally do, and it pertains to the culture in some way (it could be color, light, history, mythology, natural surroundings, and so forth.).

In 2000, a traditional Greek kiln was built on the Foundation property, so that people could experience ceramics the way the Greeks had done it for centuries. The ceramics area is open raw space with a gorgeous view of the neighboring island, Alonnisos. There is an electric kiln and wheel on site and a wood-burning kiln. The Foundation is affiliated with Nikos Rodios, who is a world renowned potter. He is known for his patented firing technique that creates a beautiful onyx which he applies to his work modeled after ancient utilitarian pieces.

The printmaking facilities overlook the Aegean Sea, with lots of windows so that the artists always see the light and the constantly changing colors of the water. The studio has state-of-the-art equipment so it can accommodate beginners to the most advanced.

The Greek culture is one of generosity, kindness, and togetherness. The Greeks are happiest when everyone is included. If you sit down to a meal with a group of people, you don’t leave until everybody is ready to leave. In this social climate, people go out together for coffee, dinner, or drinks. When you walk downtown to drink coffee, you might find a laborer, mayor, lawyer, and carpenter all sitting at the same table, enjoying each other’s company. Their views matter, not their educational level, background, or income. In Skopelos, people can leave their stress behind and be themselves. The atmosphere is relaxed and the common phrase is ‘siga, siga’ — ‘slowly, slowly.”

Skopelos is a place that takes the imagination beyond what one thinks is possible if you allow it. It is for the flexible adventurer that wants to create and be engulfed by the Greek culture. If you want to have an experience you will never forget come work on your own or with other artists at the Skopelos Greek island artist residencies. 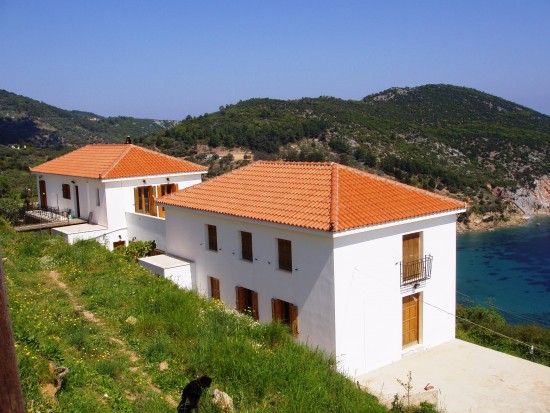 About the Skopelos Foundation for the Arts

The Skopelos Foundation for the Arts was established as a non-profit organization in 1999 by the Founder, Gloria Carr. The mission of the Foundation is to promote the visual, performing, literary, and education in the arts through cultural exchanges. Guided by the Hellenic history and culture, the Foundation promotes artistic dialogue between the Greek, American, and international artists. It offers Skopelos Greek island artist residencies