Rhonda Donovan is a new Side Arts Certified Member. After years of creating work for the publishing and advertising industry, Rhonda returned to fine art studies and completed an MFA. Full engagement in the art community has afforded solo, group, invitational, and juried exhibitions, as well as being part of large public art projects.

Merging love for making and teaching builds momentum and includes drawing, painting, and sculpture in Tampa, Florida and Paris, France. Balancing time between these different research practices has imbued artwork with rich historical references from a contemporary perspective and for contemporary issues. 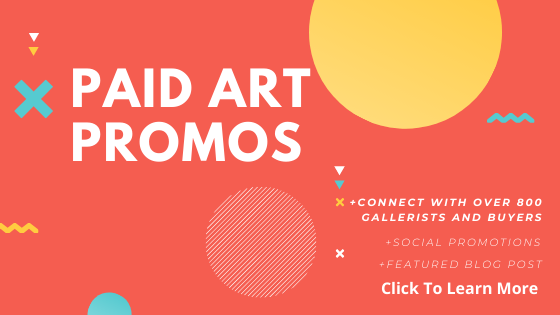 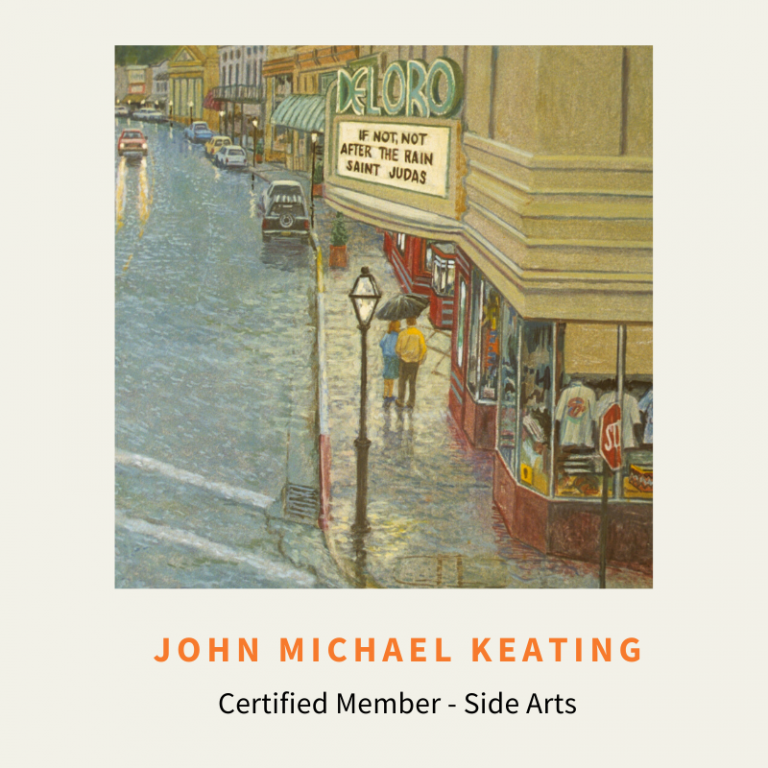 John Michael Keating is a new Side Arts Certified Member. He is Professor Emeritus of Art and Humanities at Sierra College in Northern California. He has twice been Visiting Artist at Franklin College in Lugano, Switzerland and has lectured on Art at Cal Poly State University in San Luis Obispo, California and at various arts clubs and organizations.

He has lived in Switzerland and Spain and has exhibited his award-winning oils, watercolors, and prints in the United States and Spain. His works have been purchased by Marriott Inc., Bank of America, San Francisco General Hospital, and the Toyota Motor Corporation. His paintings hang in the Firehouse Restaurant in Sacramento, Napa Valley Museum in Yountville, and Eric Rood Administrative Center in Nevada City, California. 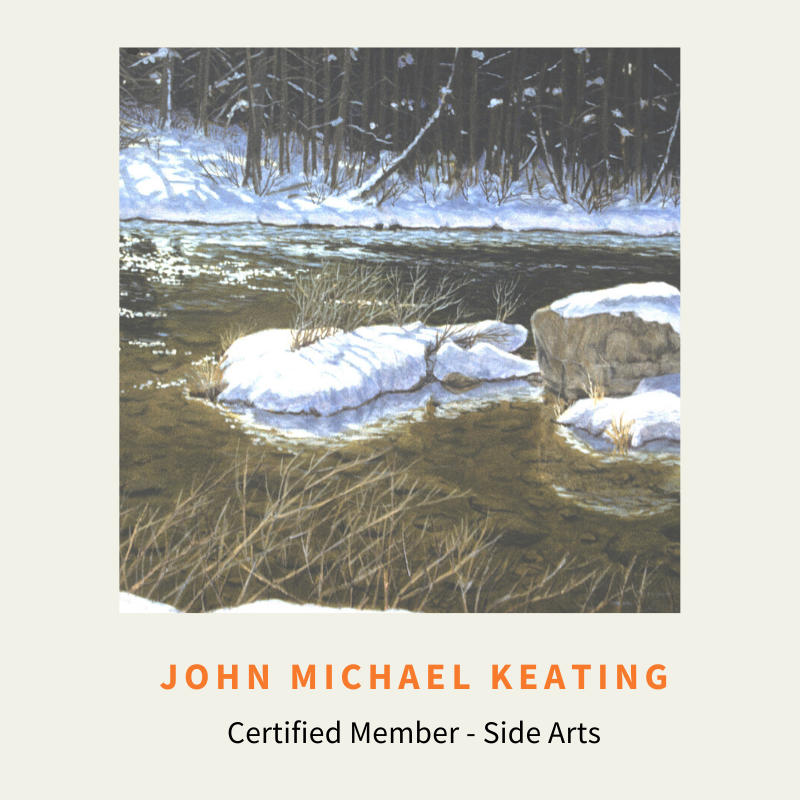 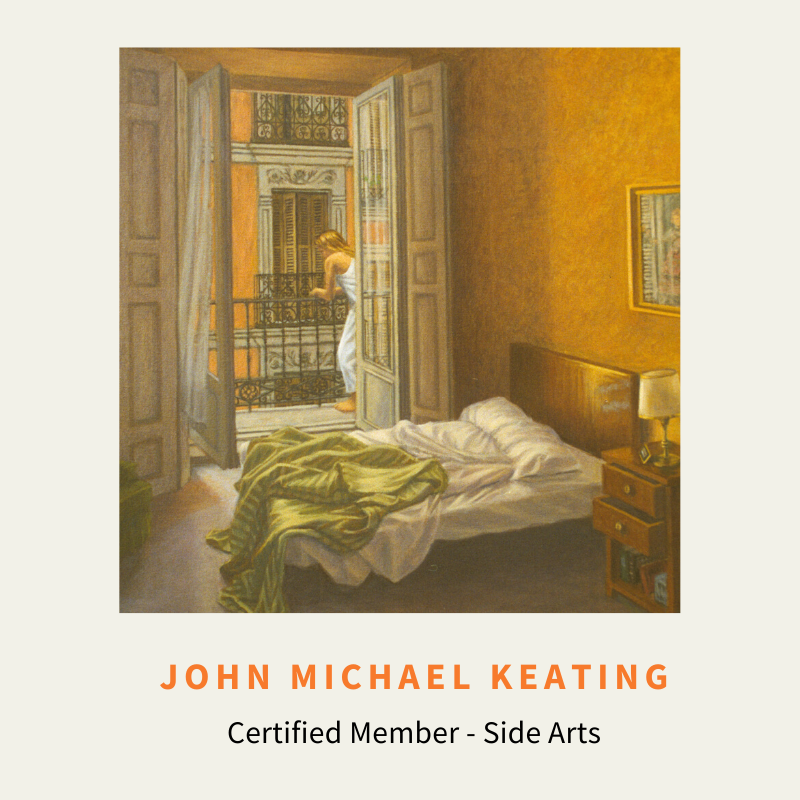 Urvashi Lele is a new Side Arts Certified Member. She is best described as a creatively eccentric person (or even an eccentric-ly creative person). An animator by day, Urvashi dabbles with embroidery and fiber art on other days and has a keen interest in clothes-making.

Nick Steinman is a new Side Arts Certified Member.

Nick Steinman lives in Philadelphia, PA. He paints simple, dream-like landscape oil paintings. Working serially, Steinman focuses on the impact of his color choices, mark-making, and paint handling. He was recently part of a group exhibition at the National Liberty Museum, located in Philadelphia.

Born in 1998, Steinman grew up in Schwenksville, PA. He went on to study Fine Art at The University of the Arts in Philadelphia where he received his BFA. Steinman was a former curator at Gallery One located in the Kimmel Center.

Ashley Verrill is a new Side Arts Certified Member.

Meet Ashley, the featured artist behind “Art by Ashley Verrill.”

Ashley holds a degree in Fine Arts from Buffalo State College. Her wide-range portfolio consists of figure drawing, acrylic and oil painting, jewelry, pottery, and wood working. Since graduating, Ashley has stuck to what she loves most: painting. She is fascinated by the human figure and using color as a form of expression. She loves the way emotion can be captured with simple lines and chromatic intensity. Ashley strives to captivate her audience with unexpected use of pigmentation, ability to emit feeling through her work, and meticulous attention to detail.

Each piece is different because it means something to her. Ashley has experienced quite a bit in her life thus far. She uses her experiences as her driver to create. In the last decade, she founded her own business, lived abroad, mastered a second language, and embraced another culture’s way of life. She has traveled, loved, and learned. All of this plays a role in her artistic vision.

Miguel Angel Castrillo is a new Side Arts Certified Member

My name is Miguel Angel Castrillo. I was born in San Sebastian, Spain in 1973. My family names are Castrillo Fernandez. Sotoko is my stage name. Since I was a child I have always been interested in arts and very specially in painting.

It was as a teenager on a trip to Italy after the death of my father who was the first to get me to draw that I could see and enjoy among others some of Sandro Boticelli´s works. I knew then that someday I would devote a lot of my time to painting as a professional.

After trying various schools of Art and Design, both in Spain and the United Kingdom, I finally finished my studies at the Massana School of Art in the city of Barcelona, Spain, graduating as a top Technician of Plastic Arts and Design in Applied Mural Arts in 2003. I have shown my works in cities such as London, Barcelona Port, and Valladolid.

Among the places where my work can be permanently seen and available to be enjoyed are at the San Joaquín y Santa Ana Museum in the Spanish city of Valladolid. 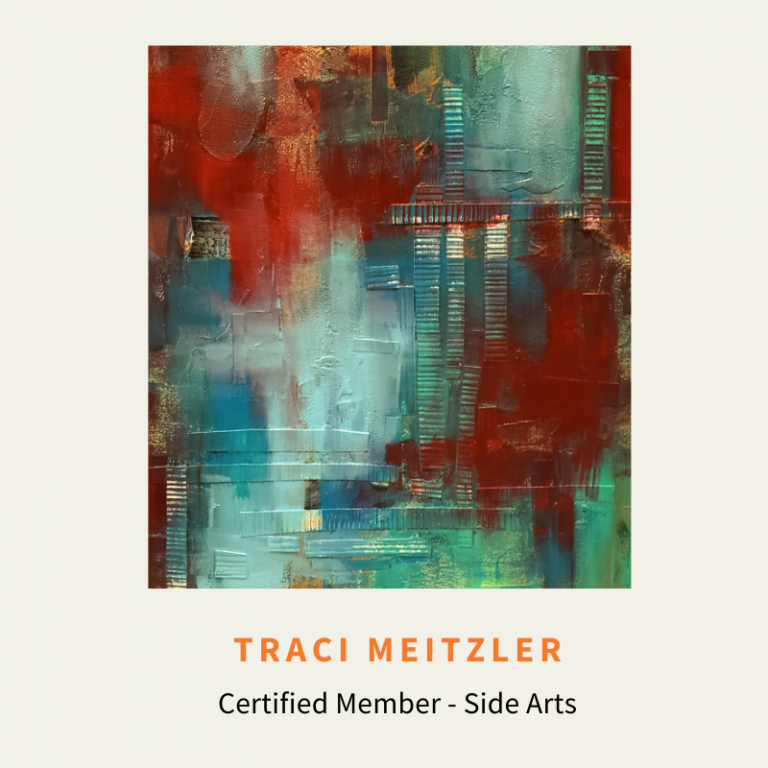 Traci Meitzler is a new Side Arts Certified Member.

As an artist, I work hard to develop art that speaks both to me and to others about my emotions and frame of mind while creating. Each piece has a story, moment in time, and feeling. The direction at the start of a project can be monumentally different compared to the conclusion. Documenting that process is the best way to see that evolution. I take many photos throughout the process and keep a diary on what has inspired me or music I’ve been listening to. Reading what I’ve written always gives me a baseline to come back to in regard to idea consistency.

I would classify my style as chaotic architecture. I enjoy the juxtaposition of straight edges with organic curves. I believe that a painting or any design cannot have just one element, but that each exists in harmony because of the other. I wouldn’t appreciate the soft curves or winding swirls if the rigid, inflexible boundaries weren’t there to limit their reach, and vice versa.

I work mostly in acrylic mediums along with other materials such as marker, charcoal, spray paint, and modeling paste. I like to add non-standard items to create texture such as clear acrylic sheets, textured wall paper, and coarse sand. I enjoy ending up with a painting that is half two dimensional and half three dimensional. It’s difficult for the viewer or, in fact, myself to resist touching it.  An entire shelf just littered with found items, cardboard, fabrics, and hardware are patiently waiting to become part of a new project. 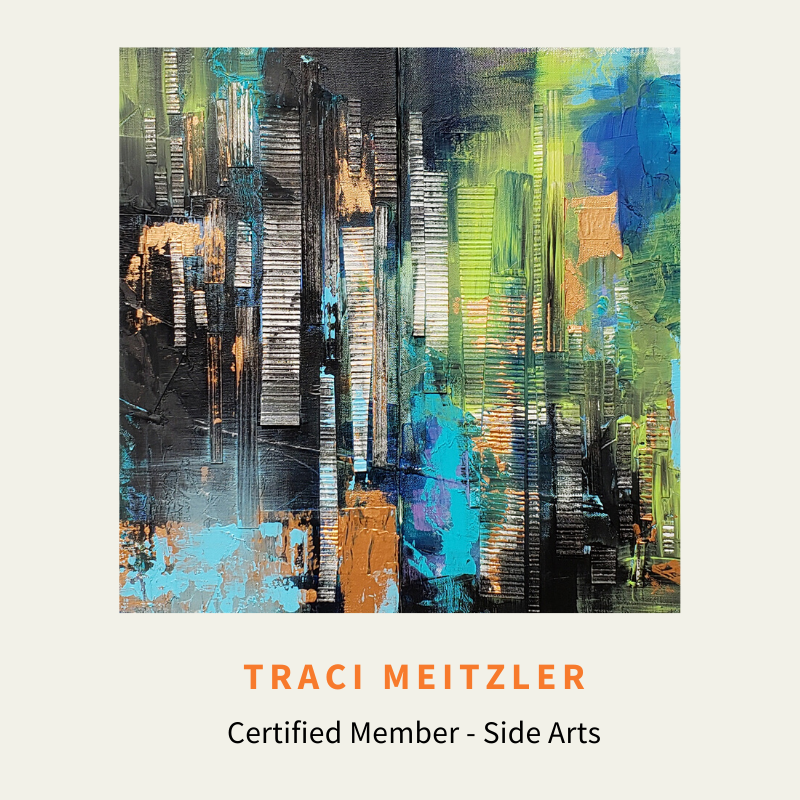 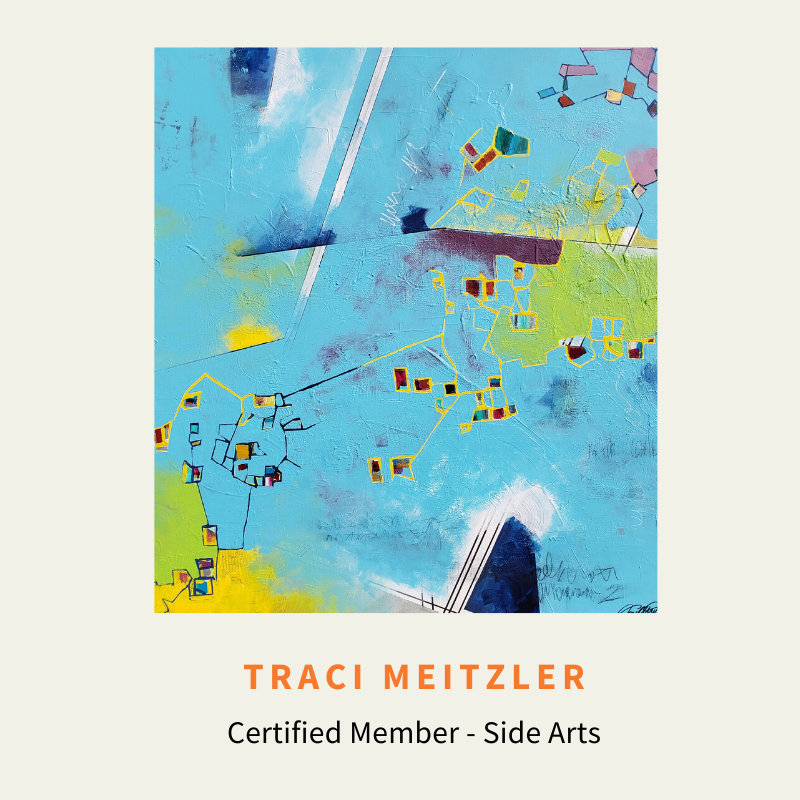 Barbara Krupp is a new Side Arts Certified Member. Barbara trained to be an x-ray technician. From that time on, as T.S. Eliot wrote in his “Whispers of Immortality,” I have seen “the skull beneath the skin.”

The structure of the painting is very important to her. In her most recent series, she has, in a manner of speaking, allowed the bones of the painting, both compositionally and metaphorically, become the painting’s’ subject matter.

Through Georgia O’Keeffe, whose early 1940’s series of pelvic bones enclosed spaces that later in the decade became forms themselves, Barbara found areas of interest in her own landscape and floral abstractions to be the atmospheric spaces between forms. She came to realize that the significance in her paintings was not in the forms, but in the spaces in between them.

In her “Abstract Stories” series, those atmospheric spaces became increasing bounded by spontaneously drawn shapes. Painted in shades of ochre-tinted white, the color of bone, the enclosed spaces began to take on shapes that suggested something as intimate and normally hidden as bone, organic shapes that suggested body parts unveiled here and there as though to tease a lover.

T.S. Eliot ends his poem with, ”Our lot crawls between dry bones to keep our metaphysics warm.” Barbara explores the interface between passion and the intellect, pulsing tissue and desiccated bone. Our lot may be to crawl through our mortal span but, like the poet, we also sing.

Fabrizia Folchitto is a new Side Arts Certified Member.

I currently live and work in Italy and have a scientific background. I am mostly self-taught and interested in many different art forms. Painting attracts me, especially the research for heterogeneous, extravagant, and ironic materials applied to canvas.

I started recently with pen drawing. I then focused on the artworks of Maraval and dedicated myself to mixed-media canvas painting using acrylics, chalk, paper, and lime, thus enriching my paintings with strong materials and geometric effects.

My personal style is evolving. I am always finding original ideas, experimenting, and measuring myself with the abstract, synthesizing materials and colors for pleasant, new impressions.

My artworks are incomprehensible and full of deep significance. I always do what I am not able to do to learn how to do it. I believe I have many talents, all proudly wasted.

Victoria Harrison is a new Side Arts Certified Member.

I believe art is central to society. It can change our world perceptions and how we understand each other. This transformative power of art motivated me to become a full time artist. In an age of accessible communication, images are being used in a way that before was not possible and there is an opportunity to exploit this. As a visual artist, I wish to seize the moment and, through artistic practice, move beyond current demands for daily, examined identities.

My practice focuses on the fragility and beauty of Nature. I mostly paint abstract landscapes, aiming to capture the delicate balance of our planet through my visualization of it. I feel this quality of the perception of Nature, particularly the play of light with colour, contains an important message today.

I studied life drawing and painting and was a member of the Hesketh Hubbard Society and the Federation of British Artists (FBA). Drawing is the basis of my work along with traditional painting techniques with new ways to explore paint as a medium. My use of colour is instinctive. I study colour theory, very often deciding on the pallet and tones before starting a new piece.

I have exhibited throughout London, northern Spain, and the USA; carried out several art commissions; and have had my work published in books and catalogues. My pieces are in private collections and a Bank Head Office. I have just had a successful show at Parallax Art Fair in Kensington, London.