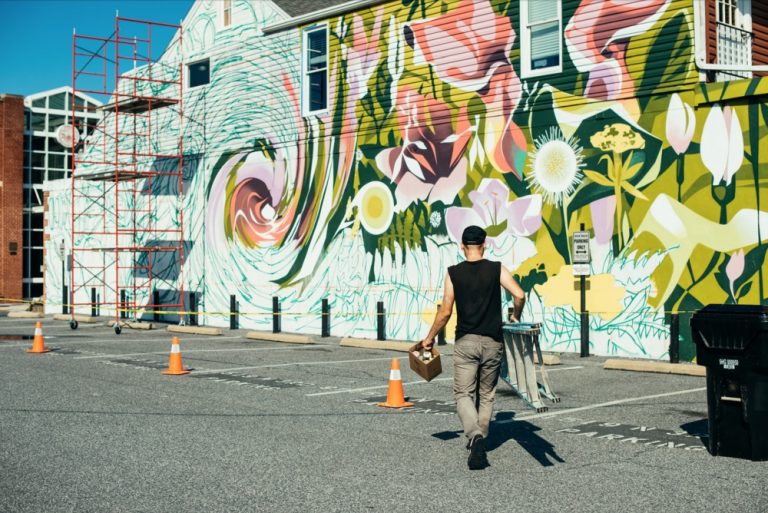 Sprocket Mural Works, a city-wide mural project in Harrisburg, PA, seeks artists interested in producing an original piece of public art during their second mural festival. 2019 HBG Mural Fest is a focused surge of city beautification through the creation of 10 murals in 10 days. The mural festival will run in Harrisburg, PA, from August 30 – September 8, 2019. The first mural festival in 2017 was an incredible success. Sprocket Mural Works is looking for artists who are excited to be a part of the second effort and make their mark on the city landscape.

Prior pubic art experience is appreciated, but not required. Preference will be given to local and regional artists, although national and international artists may be selected. Artists will be notified of their acceptance the week of April 15. The murals will be produced during the 10-day period of August 30 – September 8. Artists must be able to produce a mural within that 10-day period. Starting prior to August 30 may be acceptable, but would need to be coordinated with Sprocket Mural Works in advance.

During the 2017 event, Sprocket added 18 public murals to the face of Harrisburg. In doing so, they created the initial framework of a walkable mural tour. In 2019, they aim to fill the gaps in this trail, ultimately making Harrisburg a mural-dense city.

2019 HBG Mural Fest artists will make a permanent, public mark on Pennsylvania’s capital city that will be visible to residents and visitors for years to come. Chosen artists will receive a stipend for their participation and, if required, travel expenses will be covered. Mural materials will be supplied. Walls will be prepped prior to the artist’s arrival.

Sprocket Mural Works is a citywide mural project that works with neighborhoods, artists, and organizations to create vibrant community murals across Harrisburg. Their mission is to increase community pride and civic engagement in Harrisburg through creative action.

Over the last 5 years, Sprocket has added more than 25 murals to the cityscape of Harrisburg plus a number of additional privately commissioned murals. They have overseen projects for painting utility boxes, planters, and person-sized ducks which, combined, gave more than 20 additional artists an opportunity to be featured around town.