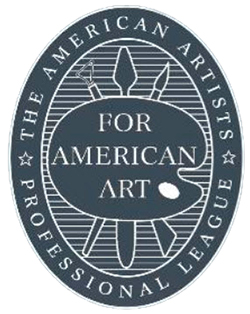 There will be over $18,000 in awards and medals. Awards will be given in all categories, with over 50 awards. There are five top awards, including Best Painting in Show, Traditional Landscape in Oil, Excellence in Pastel, Traditional Sculpture, and Traditional Artistic Merit.

The commission on sales is 25%.

About The American Artists Professional League

In 1928 F. Ballard Williams, Assistant Treasure of the National Academy of Design in New York, called a meeting of 15 members of the Salmagundi Club. The purpose: to discuss the need for a national organization to meet the increasing interests in traditional realism in American art. The attendees all agreed that an organization designed to protect artists’ interests and promote traditional American art was necessary. The American Artists Professional League (AAPL) was born.

The AAPL first focused on the issue of obtaining commissions of official portraits for American Artists. By using its national stature, the AAPL influenced a rider to a Congressional Bill stipulating that all official portraits paid for with taxpayers’ dollars were to be painted by American artists. A fact that remains in effect to this day.