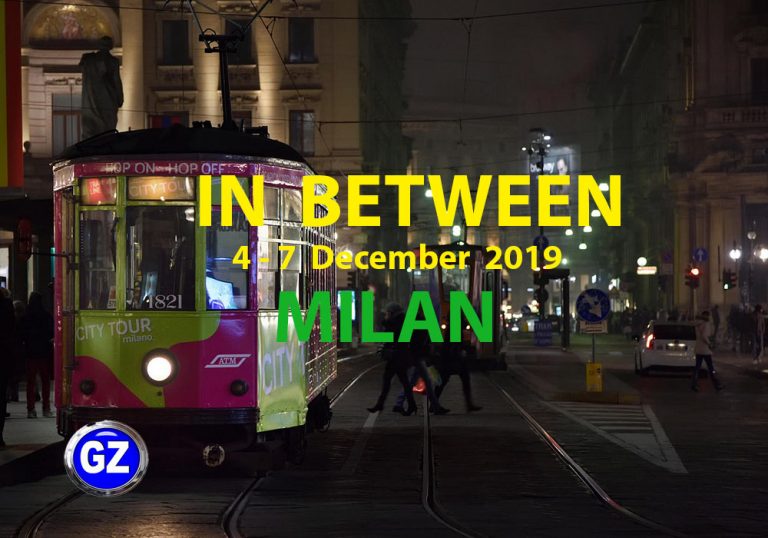 GaleriaZero announces a call for artists for In Between 2019, exhibition to be held 4 – 7 December 2019 in Milan, Italy. This international collective event of contemporary art in Milan, Italy includes painting, photography, sculpture, installation-art, design objects, drones, and any other media related to art and technology. The title, In Between, refers to the meaning transmitted by a variety of art media. It refers to the human quality to read the meaning behind and between the artworks. Curated and organized by GaleriaZero from The Netherlands in collaboration with Primerent / Milan.

Artists will have the benefit to be promoted internationally and to display their work in a prestigious location in the center of Milan. The participating works will be integrated in a common lay-out concept that involves contemporary art, design, and technology. Many car and drone fans in Milan will be invited.

GaleriaZero (from 1997) may be considered a dynamic art gallery that specializes in the international promotion of artists and the increase of the communication between perception and art in its widest sense. This means that they do not center only in visual artists, but as well in photographers, performers, architects and even poets, light, and sound artists.

The concept is not just exhibiting artworks. GaleriaZero promotes presentations as a general concept and integration between several art forms. The aim is to provide a specific art experience in line with the theme and concept of the exhibition project. They transmit a specific meaning in the conjunctions presented in order to promote a social discussion or contribution of interest.

In the mentioned sense, GaleriaZero is not a commercial art gallery, but more a promoter of artists and a creator of socially relevant art presentations realized in collaboration with the artists, the location, and specific professionals for the characteristics and the quality of the art experiences. For this reason, artists can apply for art exhibitions and participate in the selection procedures, but in many cases artists will be approached if their way of working is in line with specific projects. Usually, participation will involve economic collaboration by artists or sponsors in order to cover the realization costs, publicity, and specially to guarantee the quality of the presentation in general.

Previous call for artists from GaleriaZero

Now in its 6th year, The Lumen Prize has awarded over $40,000 in prize money. It has staged over 30 exhibitions worldwide in cities including New York, Shanghai, Amsterdam, and Athens.

The competition offers a prize fund of $10,500 plus inclusion in Lumen’s annual programme of exhibitions and events. These take place globally for shortlisted and winning artists.

Please note, there is an administration fee of $45. This covers two entries and all fees go directly to the prize fund.

Shortlisted and category winning artists will be included in the 2017 Lumen Prize global tour which takes place worldwide. Category winners will also receive a cash prize.

About the Lumen Prize

The Lumen Prize, the pre-eminent global award and tour for digital art, is a not-for-profit dedicated to supporting artists working with technology.

In 2016, the competition attracted entries from more than 50 counties. The 2016 Gold Award was presented to the Italian duo Fabio Giampietro and Alessio de Vecchi for their virtual reality masterpiece ‘Hyperplanes of Simultaneity.’

Previous shortlisted artists and recipients of The Lumen Prize have gone on to achieve success around the world including the British artist Andy Lomas, whose 2014 winning work Cellular Forms is now in the collection of the V&A; Alexandra Handal, winner of the 2014 People’s Choice Gold Award, whose web-based Dream Homes Property Consultants was recently acquired by the Museum of Contemporary Art, Denmark; and Michael Takeo Magurder, recipient of the 2015 Immersive Environments Award for A New Jerusalem, who is currently artist-in-residence at The British Library.

The City of Windsor announces a call for w.a.v.e.s. 2016 (Windsor’s Artists, Visions, Energies & Sculptures), a two-day festival connecting communities through waves of art, culture, and technology.

The City of Windsor is seeking outdoor projects that will transform and illuminate the Windsor Sculpture Park in new ways to inspire and engage the public in examining its cultural significance. Activities and opportunities for community engagement and hands-on experience are encouraged.

Potential projects could include:

The festival will be held Friday September 30 and Saturday October 1, 2016 at 4 PM – 11PM at Windsor Sculpture Park (on the border of Detroit, MI).

Successful applicants for this open call will receive funding for their participation and be determined under one of the following categories:

The Windsor Sculpture Park is ending its final year in the fulfillment of a bequest to give the park back to its residents. This showcase is for contributing artists who can re-imagine the space and coordinate installations or activities that transform how we view the park. The Windsor Sculpture Park sits on the banks of the Detroit River in a lush green space with the Detroit skyline on the horizon. Our community is the longest-running inhabited land in the country. We are the gateway to Canada.