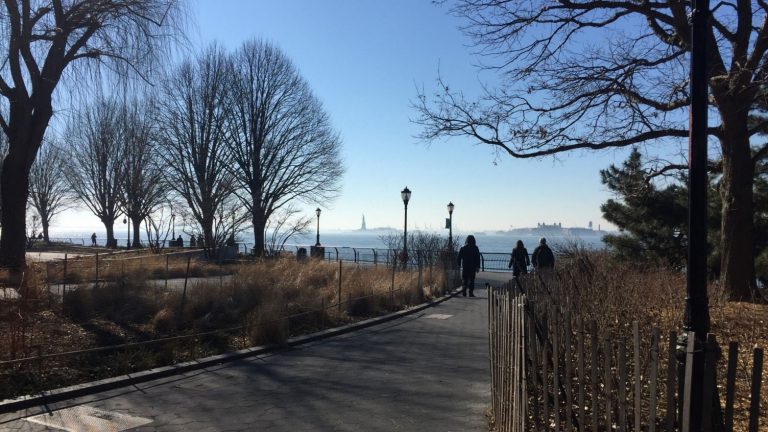 Search for artists to develop Mother Cabrini Memorial now open. To be placed in Battery Park City’s South Cove. The memorial honors the legacy of Mother Cabrini, who dedicated her life to serving her community and those in need.

New York State Governor Andrew M. Cuomo announced the Mother Cabrini Memorial will be placed in Battery Park City’s South Cove in direct view of the Statue of Liberty and Ellis Island. The Mother Cabrini Memorial Commission has begun its search for artists who will design and execute the Memorial honoring the legacy of Mother Cabrini. Mother Cabrini founded dozens of institutions that served the less fortunate, including educational organizations and programs to support her fellow Italian-Americans who immigrated to the United States.

“This memorial will honor the legacy of Mother Cabrini – a great New Yorker and Italian-American – and the Commission chose a site that perfectly symbolizes her commitment to helping new Americans settle in the United States,” Governor Cuomo said. “We want this memorial to pay tribute to the charity and goodwill she spread to countless others in her lifetime, and I look forward to seeing the designs that the artists propose to capture that spirit of her generosity.”

The Mother Cabrini Memorial Commission will review and select finalists from the submitted proposals. They will recommend proposals to the Governor for his final selection.

The budget for design and fabrication of the Memorial artwork is up to $750,000, which includes an artist fee of up to, but not greater than, 20% of the total project budget cost. The total project cost must include delivery to the site and installation.

As part of this fee, the selected artist will be required to submit a final budget, produce completed designs, select a fabricator (if not already part of the team), and oversee the fabrication and installation of the artwork as well as guide any necessary landscape restoration or other treatments required at the site, two weeks after the award notification. The staff from the Battery Park City Authority and Office of General Services will be available to provide their technical expertise and site-specific knowledge in support of the implementation of this project.

About the State of New York Governor Cuomo

Andrew M. Cuomo is the 56th Governor of New York, having assumed office on January 1, 2011. Throughout his entire life, Andrew Cuomo has had the same values and the same principles; he has not only believed in those values and principles, but he has developed the skills to fight for them – and to win.

As Governor, Andrew Cuomo has fought for social, racial and economic justice for all New Yorkers.

Under his leadership, New York passed marriage equality, a $15 minimum wage, the strongest paid family leave program in the nation, the strongest gun safety laws in the nation, equal rights for women, greater protections for immigrants, the largest investment in education in state history, cut taxes for the middle class, implemented a 2 percent property tax cap, put more New Yorkers to work than ever before, and became the first state in the nation to offer free college tuition for middle-class families. He also got the state building again – taking on projects that had been stalled for decades and using union labor every step of the way.