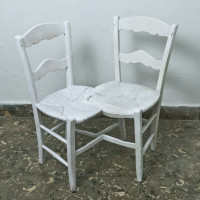 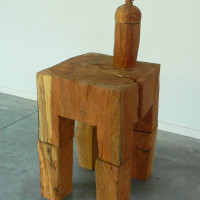 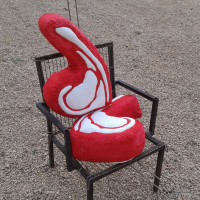 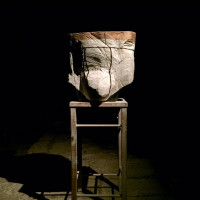 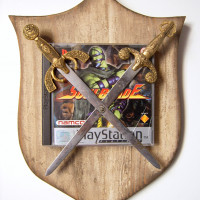 Marcos Vidal Font interventions start from the most domestic furniture (chairs or tables), looking for a relation with the space. Erasing and connecting parts of them. Vidal plays with the meanings of the object with a personal sense of humour.
A mirror, a draw or a shadow can transform a simple object also our view of a space. Vidal usually works with found materials, stuff that he found around the place. That produces to a deeper connection with that place, the installation becomes in an unique piece.

Graduated at the "San Carlos" Faculty of Fine Arts in the Polytechnic University of Valencia, Spain in 1991, graphic art degree. He received twice a grant from the Pilar i Joan Miró foundation in Mallorca, Spain (1993, 1997). In this Foundation he participated in five workshops (1994 to 2006). In 1995 he was invited to develope his work in the Experimental de Gráfica and René Portocarrero workshops in Havana, Cuba, with the support of the Spanish Ministry of Culture. In 1997 he was invited to stay in the Frans Masereel centre in Kasterlee, Belgium. He has been guest artist also in Starke Foundation in Berlin, and received a grant of the Spanish Ministry Foreing Affairs AECID for a stage and exhibition in the Raketenstation in the Insel Hombroich Foundation in Germany. In 2012 he received a CRIDA stage grant, from City hall of Palma de Mallorca, and in 2014 the residency program Lichtemberg Studio’s, Lichtenberg-Berlin City Hall.

It is important to mark especially his participation in events as the 2nd and the 3rd Beijing international art Biennale, the Olympics Fine Arts in the China international exhibition center in Beijing, China Olympic Committe in China, the Biennale Mediterranea Nº2 in Dubrovnik suported by the Italian Ministry of affair exterior and the Croatian Ministry of culture in Croatia, the Triennial Majdanek, in the Majdanek State Museum, Lublin, Poland, the 11th Gielniak print competition in Jelenia Góra, Poland, the BIPAF Busan international print art festival in Korea, or the IEEB4 International Experimental Engraving Biennial in Brancovan Palaces Museum, in Bucharest, Rumania. Or the Lomea art Symposium in Rousse, Bulgaria.

He coordinate the independent association Espai Sant Marc. Sant Marc did several exhibition projects in art centres and in collaboration with artist-run associations as Lacasadelcactus, Incart, Drap-art, or Pronostica and in international artist-run events as the Water Tower art fest in Sofia, Bulgaria, several times in the Cervantes Institute 2010,2011,2014 and 2015. Participated in the Supermarket independent art fair 2010, 2011, 2012, 2013 and 2015 in Stockholm, Sweden and in Suomi Art Fair 2013 Helsinki, Finland, and Art-Athina 2014 art fair with Incart.

He several times teached in workshops about etching technics or about kids creativity. In places like Teachers center of Inca, Government of Balearic Islands, Mallorca, City Hall of Binissalem, Mallorca, Workshop of order and kaos in Pilar i Joan Miró Foundation in Mallorca, Es Jonquet cultural center of City Hall of Palma de Mallorca, or Workshop of ludic sculpture in Es Baluard Palma Art Modern and Contemporany art Museum in Mallorca, Spain, in Harmmarby art port in Stockholm, Sweden, and in the Center for contemporanian art creation of the City Hall of Palma CAC Ses Voltes, Spain.