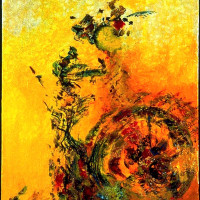 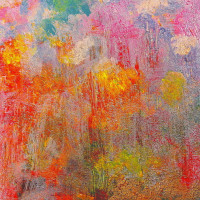 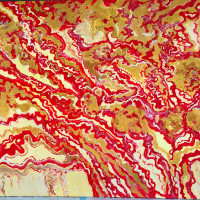 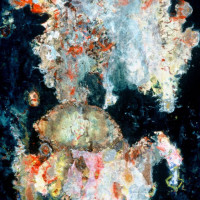 Site-specific commissions in the United States include a pair of large signed acrylic and mixed media paintings housed in the Bellagio Conservatory at the Bellagio Hotel in Las Vegas, Nevada since 2004 at the request of MGM Resorts International, wall mural created at Crooked Creek Elementary School, Indianapolis, Indiana in 2008, a pair of large paintings featured in the College of Medicine at the University of Illinois at Urbana-Champaign, Illinois since 1996, five large paintings commissioned by the Arts Council of Indianapolis as a temporary installation in downtown Indianapolis in 2006. Private commissions include a three paneled painting or triptych for the CEO of Biaggis Restaurant, Bloomington, Illinois in 2016 and large painting created for a private client in Boston, Massachusetts in February 2018.

Chitra Ramanathan earned her Bachelor of Fine Arts degree in Painting with honors in 1993 and M.B.A in 1997 from the University of Illinois at Urbana-Champaign. While studying art in Paris, France during her student years, she was influenced by the Impressionist Movement, particularly Claude Monet’s garden in Giverny. France where she also spent extended time. By this time, Chitra Ramanathan’s abstract paintings comparing the emotion of happiness as cyclical and fleeting to ephemeral garden blooms had taken shape as a primary concept.
The artist’s intuitive style involves treating her canvases to fresh, bright colors executed with rapid brush strokes, combined with varied intricately interwoven textural materials that extend the quality of extending the two-dimensional surface. Many of her paintings are created in expansive scale or as multi-paneled works which makes them attractive for displays in public spaces. She regularly employs various materials including fibers, found objects, plastics and even wood to fashion her ideas.
The artist’s career debuted in 1994 through a solo exhibition at the ARC Gallery/Educational Foundation in Chicago, Illinois shortly after completing her Bachelors degree. In 1995 different galleries on SoHo, Broadway, New York City hosted solo and group exhibitions of her acrylic and mixed media paintings, attracting notice by art critics including Manhattan Arts Magazine.

Her numerous originals have since then been acquired by private collections, businesses, auctions and site-specific public art commission invitations. Some examples of completed public art installations include permanent installation of a pair of 4 feet wide and 6 feet tall signed paintings housed inside the Conservatory & Botanical Gardens - Bellagio Hotel commissioned by MGM Resorts International in 2004, a 13.8-foot wide mural created at Crooked Creek Elementary School through a grant by the Washington Township School District of Indianapolis in 2008, several large paintings of varied sizes commissioned by the Arts Council of Indianapolis for installation in Chase Bank Towers, downtown Indianapolis during 2006-2007. Two large-scale paintings displayed at the College of Medicine in the University of Illinois at Urbana-Champaign in 1996 are being planned for relocation to University of Illinois at Chicago’s newly created art gallery in 2018.

As an educator, Ramanathan has been teaching classes and workshops in abstract painting, acrylics and mixed media for several years, formerly at the Indianapolis Art Center and currently at the Art School of the Vero Beach Museum of Art, Florida accredited by the American Association of Museums.
In 2005, she was invited by the head of the Royal Academy of Arts, London as a Visitor Artist for a visual presentation and conducting student critiques at the Royal Academy of Arts Schools. Professional Artist Residencies in Europe at the Camac Centre D’Art at Marnay sur Seine near Paris, France and the Scuola Internazionale di Grafica at Venice, Italy in recent years have added to fresh inspirations and cutting-edge techniques for her current work.

Chitra Ramanathan is a member of the College Arts Association, New York and Americans for the Arts. She has served in the jury panel for art competitions including the Annual All Florida Juried Arts Show in Stuart, Florida in 2014 the National Scholastic Art & Writing Awards, South/Central Indiana region for 2012 and 2013.

Her website is https://www.chitrafineart.com, and a 2016 interview tracing Chitra Ramanathan’s artistic journey by the University of Illinois Asian American Alumni Network is featured at http://www.uiaaan.org/article.html?aid=454