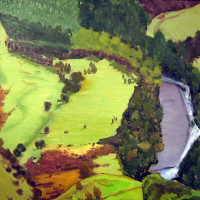 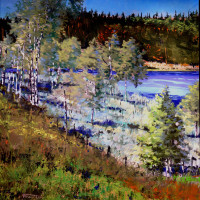 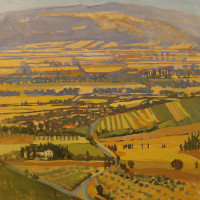 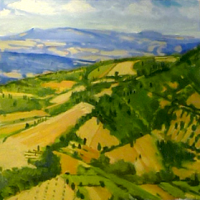 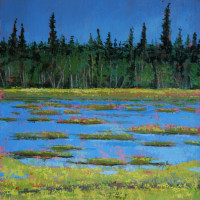 The cultural and aesthetic banner under which I trained might best be summed by the term "painterly". I studied at a school that carries on that tradition, I turn to artists that care about figuration, perception, and representation. The painter and writer Fairfield Porter traces a painterly path back to Vuillard and Bonnard as a counterpoint to the myriad of isms that cropped up throughout the 20th century. But Porter and painters like him also point forward to a viable representational art that has not completely run its course and many fine painters stubbornly remain on this perennially idiosyncratic trajectory. I work within this tradition, but not in a backward looking, nostalgiac way. As a contemporary painter I am invested in the present and the notion that an objective correlative must be seen between the work and prevailing living circumstances: culturally, theoretically, and empirically. I rely on the dynamic of observation and response and within this framework look to "discovery and invention" in the words of Euan Uglow. I seek discovery and invention in rather synthetic formal painterly ideas, chief among them the idea of small c caricature. I paint landscapes, spend a lot of time looking at and responding to the natural world, but in the end my main focus is on the formal discipline and character of painting.

He paints out of doors regularly in the summer months in New England and the Canadian Maritime provinces. More recently, he painted in Finland and in the Skåne region of Sweden . In the summer of 2011 he spent a month painting in New Zealand while an artist resident at The New Pacific Studio in Kaiparoro, NZ. He was artist-in-residence at arte studio ginistrelle, Assisi, Italy in August 2012. In addition to landscape subject matter, the artist draws the figure from life as a regular part of his practice.

Paul Reuther teaches drawing and painting in the Washington area at Montgomery College in Rockville, MD and at George Washington University in Washington, DC.

Since October, 2007, Paul has been hosting an open life drawing group Dupont Drawing Group in his painting studio located in Dupont Circle, Washington, DC. There are approximately 400 members in the group which held its first member exhibition at Church of the Pilgrims in May and June, 2013. Beginning in October, 2013 The Dupont Drawing Group expanded to include two weekly drawing sessions and took up an addittional residence in a new studio space in Brookland, Washington, DC. Collectively the group is now called the Washington Drawing Center.