The Regional Municipality of Wood Buffalo (RMWB) intends to commission an artist/artist team to design and install a mural at the Bob Lamb Bandstand at Borealis Park. The mural will cover the entire interior of the bandstand (including the underside of the roof) and the exterior walls.

The project includes a mentor component which will allow the selected artist to develop their mentoring skills. 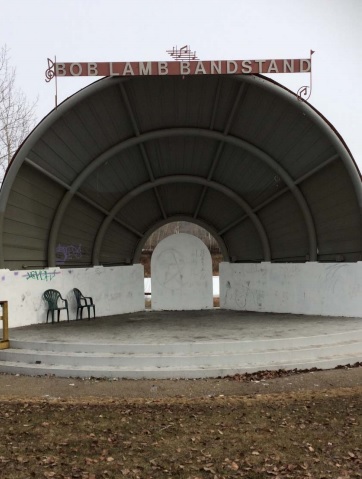 Wood Buffalo is a large, scenic region in Northeast Alberta. The region stretches from north central Alberta east to the borders of Saskatchewan and up north to the border of the Northwest Territories and covers 10% of the province, spanning almost 70,000 square kilometers. It has extensive natural resources, and is filled with natural beauty, including beautiful clear waters and expansive forests.

The Regional Municipality of Wood Buffalo is one of Canada’s youngest and most dynamic communities, and is one of the largest municipalities in North America. Fort McMurray is the urban service center for the area. Smaller communities within the region include Anzac, Conklin, Draper, Fort Chipewyan, Fort Fitzgerald, Fort Mackay, Gregoire Lake Estates, Janvier, and Saprae Creek.

Approximately 5,000 years ago, the region was inhabited by two distinct First Nation people including the Chipewyan and the Cree. In 1778, a fur trader named Peter Pond traveled to the region and it became known for its abundance of good quality furs. This led to other explorers visiting the region and to the discovery of bitumen, a natural resource that when refined, can be converted into petrol. The discovery of these large deposits of bitumen, commonly known as the oil sands, led to rapid growth and development. In the last century, the population has grown from a sparsely populated area to over one hundred thousand people.

Wood Buffalo boasts a rich and diverse culture. It is home to a population with a variety of ethnic backgrounds and cultural beliefs. The arts and culture scene, including live theatre, historical centres, cultural societies and visual arts continues to grow within the region. Outdoor festivals and local art shows are commonplace year-round. In support of the increasing interest in Wood Buffalo’s arts scene, the Municipality recently approved a Public Art Policy.

Call for artists to show off your alternative side at Vancouver Alternative Arts and Fashion Week (VALT) during November 17-20, 2016.

VALT is run by the Style, Entertainment, Art & Media Society – SEAMS. This not-for-profit organization focuses on developing local arts programming that assists emerging and fringe artists of every medium and media in the province of British Columbia, while fostering a community of culture appreciation.

VALT provides a professional, well appointed venue, sound system, projection setup, and months of marketing and public awareness. As a participant in VALT, all you need to bring is yourself and your work. We take all the guesswork out of showing at a festival. Our attendees are extraordinarily varied – a very different crowd than one usually finds at a fashion event. You can promote yourself and your work without having to organize or advertise anything (though we do encourage you to invite guests and publicize as time permits).

The New Gallery – Call for Artists

The New Gallery (TNG) is seeking proposals for the 2017-18 programming year.

Please note that The New Gallery accepts proposals for solo exhibitions, but may also consider individual artists for inclusion in a curated group show. Main Space exhibitions range from four to six weeks in duration.

The New Gallery only accepts digital submissions via e-mail. Physical materials will be discarded or recycled. Please format all written materials as a single .PDF document. Images must be numbered RGB .jpeg files with a maximum resolution of 1024 x 768 pixels at 72 DPI and no larger than 1 MB in size. TNG accepts links to video and audio work hosted online. E-mailed applications must be submitted in a single .zip folder containing both documents and images.

Exhibiting artists are offered a fee of $1900 to show their work (commensurate with 2016 CARFAC Fee Schedule – A.1.1) Additionally, TNG provides both accommodations and financial resources to aid artists in managing shipping and travel costs. Details of this budget are determined on a case-by-case basis.

TNG is committed to providing opportunities and venues for artists that foster social and political creative practices, while engaging and educating audiences through contemporary art. TNG’s Main Space is located at 208 Centre St SE in Calgary’s Chinatown. Main Space programming comprises exhibitions by artists, collaborators, curators, and other cultural producers from a variety of backgrounds and experiences.

Creative Airdrie hosts an Annual ARTember event, supporting and celebrating the Arts and Culture Scene within Airdrie. This year‘s ARTember will include a multi-day outdoor Arts Festival and ARTember art market.

The anticipated attendance is 4,000 individuals over 2 days.

The Creative Airdrie Society (CAS) acts as the hub for investment, promotion, engagement, development, and education of the arts in the Airdrie community. Formed in September of 2010 by business leaders and artists, CAS has successfully changed the arts landscape in the City of Airdrie by launching an annual arts festival and creating several ground breaking public art initiatives. CAS is generating city-wide buzz for their focus and acumen to move arts and culture to the forefront of the general population and local and regional government.

This two-day event on August 13th and 14th will include open studios where New Westminster artists feature their work and creative process. The New Westminster Cultural Crawl 2016 will organize live paint-ins at popular arts, culture, and heritage destinations around the city of New Westminster, BC, Canada.

With the support of local artists, artist groups, businesses, and cultural enthusiasts, the New West Cultural Crawl has become an annual tradition.​

Every Day in Every Way – Call for Artists

Kickstart Disability Arts & Culture is seeking BC visual artists who live with a disability for possible inclusion in the new program year, called Every Day in Every Way which runs from April 2016 – March 2017.

Our theme is open to multiple interpretations and can be viewed as having layers of political and social meaning, particularly for people with disabilities. Our hope is to bring awareness to the contributions made by artists with disabilities to our cultural community, every day in every way.

The three curated group exhibitions will be at:

It is free to apply. Artists will be notified about the selection results by July 1, 2016.

Exhibiting artists will be paid CARFAC fees for exhibiting and Kickstart takes 0% commission on sales.

Kickstart Disability Arts & Culture is a registered charitable non-profit organization that promotes and supports artists who live with a disability.

Newmarket Group of Artists (NGA) announces a call for artists for the 2016 Newmarket Studio Tour and Art Show to be held on October 15 and 16.

Join our growing movement of local and talented artists. Last year’s show brought over 2,000 visitors and over $35,000 worth of local original art was sold.

The NGA was formed in 2009 to launch the inaugural Newmarket Studio Tour and build awareness of local visual artists.

Since that time, the NGA has grown and now provides more opportunities for our artists, such as art shows at the Art Gallery at Southlake and Covernotes Tea and Coffee House, the Artist Market, and marketing workshops.

The selected mentoring artists will receive $6,500.00 CDN each in compensation (including cost of local accommodations) plus a modest budget for art supplies.

The expectations of the two mentoring artists are as follows:

The Mentoring Artists must have:

The Regional Municipality of Wood Buffalo is the second largest Municipality in Canada, located next to the Athabasca Oil Sands. We are surrounded by nature nestled between five rivers. Our summers are long and beautiful.

To mark the occasion, DAM will feature culturally diverse artists in a large unprecedented event, happening at TOHU. Proud partner of this celebration, TOHU will open its doors for four days, hosting a giant exhibition and living art performances of all kinds.

The event, which will take place from September 15 to 18, 2016, will begin with a fundraiser evening for DAM, followed by three days of free activities open to the public. Throughout the event, courses, art workshops and cultural mediation projects will be in the spotlight.

The artists will have the opportunity to showcase their work during the event in front of more than 400 people. Plus, a lump sum will be provided for performances and workshops.

DAM has taken on the mission to promote cultural diversity in the arts by encouraging the recognition and inclusion of all artists in professional networks, cultural institutions, and distribution channels in Montreal.