Japan Day is inviting all visual artists to submit their work to Japan Day Art Contest 2017 to select our Japan Day Official Artist.

We are accepting submissions that incorporate the three themes of New York, Japan, and Central Park. The chosen artwork will become the official image of Japan Day @ Central Park 2017.

All Japan Day Art Contest 2017 winners will be announced in late March/early April 2017. The awards will be presented on the day of event in May 2017.

The grand prize winner’s artwork will be used for our official poster, program, flyer and T-shirts. The winner will also receive a pair of round-trip Economy Class tickets to Japan, provided by ANA.

The grand prize winner and all honorable mention winners will each receive a digital camera provided by Nikon Inc. Moreover, their artwork will be displayed at an exhibition space on the 18th floor of the Consulate General of Japan in New York. 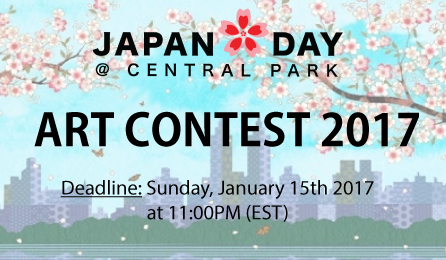 Begun in 2007, Japan Day @ Central Park is an annual event designed by the Japanese community of New York to promote a deeper understanding of the Japanese culture and to say, “Thank you, New York!” It has received official support by the Office of the Mayor, the New York City Department of Parks & Recreation, the Central Park Conservancy, New York Road Runners, the Consulate General of Japan in New York, the Japanese Chamber of Commerce and Industry, The Nippon Club, and many other Japanese and American corporations and organizations. The event kicks off with the Japan Run, a 4-mile mini-marathon and Kids’ Races, hosted by New York Road Runners. The event continues with the Japan Day Festival featuring wide range of Japanese traditional and family-friendly activities, free samplings of popular Japanese cuisine, and powerful stage performances throughout the day.

The Gateway Art Center NYC invites photographers to compete for a solo exhibition in our Midtown Manhattan gallery with the International NYC Photography Competition.

Entries for the International NYC Photography Competition are limited to the first ninety applications in each of five categories. Professionals and non-professionals judged separately. Twenty entries (ten professional and ten non-professional) invited for a group exhibit.

Non-professionals/students compete in the Non-Professional Division for the same awards and recognition as professionals.

Gateway Art Center NYC and our sponsors promote the appreciation of photography, showcase emerging talent, and introduce photographers from around the world to New York City.